Some publishing trends are good. Others, not so much.

Trends come and go in the publishing world. But what happens when one appears that is not so beneficial to authors? Particularly with the traditional publishing houses, having a platform is more often than not a requirement for authors. Recently, editors have been attempting to get unsolicited blurbs for novels before publication. This requires the author to have connections to well experienced, well versed reviewers. If the author cannot provide this, where does it leave them? Is this trend really helping authors?

The soliciting of blurbs from authors for unpublished novels or novels on submission or before they have been edited. 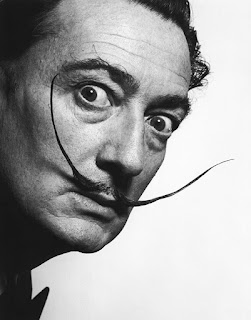 Pic: Salvador Dali- Not a Bad Actor but I couldn’t resist that moustache! (photographer Phillippe Halsman 1942)
Today I was perusing Twitter for interesting writing links and I noticed that there was an online chat with Victoria Strauss from Writer Beware. What a super site. Victoria mentioned that it was started in 1998 with the late Ann Crispin. If you put #bookmarketingchat in the Twitter search box you can get a great rundown on the shonky clauses and bad hat operators out there in publishing land from today’s chat.
Chuck Wendig published a thoughtful piece on a trend he is seeing that he is NOT OK with. The soliciting of blurbs from authors for unpublished novels or novels on submission or before they have been edited. Blurbs for editors to take to acquisitions meetings??? So they’ll only publish if you’ve got fancy writer friends? (Not to mention shady opportunities.)
Agent Janet Reid has also highlighted a problem with agent persona theft that is happening.
If an agent is contacting you first… check up! Are they bona fide?
While we’re on bad ideas… Hugh Howey recently published a blog article where he describes the inertia of bad ideas in the writer’s room. He is taking part in a writer’s room for screenwriters at the moment and watching what happens when a writer gets an idea that proves to be bad and how everybody can get carried away trying to make it fit.
Kris Rusch has an interesting article this week on learning from watching horrible performances. What worked? What didn’t? Where was the point that the audience was lost? Now, how could you apply lessons learned in your manuscript?
Apparently, Google Play have made it easier to publish on their platform. After making it really hard last year that many aggregators gave up on them. I went hunting for an explanation and found this article by Publish Drive on how to get yourself into Google Play.
Meanwhile over in Sweden, The New Publishing Standard has a remarkable post today on the tipping point of digital versus print in their publishing landscape. The subscription model in the Nordic countries might be breathing life into the backlist but what about the printers…This makes the recent meeting of printers and publishers in the US have a lot more meaning for the future of print publishing.
Written Word Media has published a list of the top ten trends that 2020 will bring to publishing so be prepared.
Have you heard of a Mary Sue? Do you know what it means? Are they the kiss of death in your novel? Litreactor takes a look at this writer/superhero stand in.
James Scott Bell is one of the better writing craft gurus around. This week he looks at the themes of The Kings Speech and what writers can learn from the way the beats were used to mine emotion in the film.

Scribendi has put together their list of the 30 best writer’s websites in 2020. Take a look. There are some tried and true sites that have featured here over the years and some new ones you might like to explore.
Maureen
@craicer