Publishing News Roundup Series: How Authors Can Use the Influence of Social Media

It’s important to know the influence of social media, and how it can effect a community in a positive or negative manner.

Authors with strong social platforms have the ability to influence their followers. It is important to use this platform wisely and ensure that people do not get influenced negatively by your thoughts an opinions. Make sure to represent yourself as you want to be perceived by the public. Use your platform to spread some good. 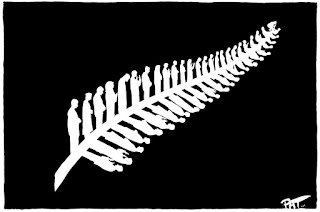 Pic: The NZ iconic silver fern, which is a real plant, was redrawn this week by Pat Cambell in the Canberra Times as Muslims going to prayer. (Heart Broken.)

Last week was a terrible week.
For my international readers, NZ had a terrorist attack perpetrated by a white supremacist from another country. 50 citizens and visitors to our country were killed along with 50 wounded. For a country of nearly 5 million people, with about 2 degrees of separation, the scale of the tragedy is like 4000 people killed in the United States of America. Today our government made it illegal to own a semi-automatic military-style weapon or magazine, effective immediately.

As a nation, we have been forced to look at ourselves in the mirror. Could we have done more to call out hate speech and racism? As we all reflect on some harsh truths, our leaders have been quick to act, to demand that we not say the name of the attacker or anything he espoused. To make funds available for flights and funeral costs to victims families. To extend visas to people caught up in the tragedy of Christchurch. As messages poured in from around the world we were reminded that the world is smaller due to Social Media.

Social Media brought out the best of our global citizenry with donations, food, flights, and vigils all being quickly organised. But Social Media companies were shown to be the worst global citizens when they failed to stop the hate message video that was live streamed by the terrorist despite trumpeting how good they were at policing their sites.

Many NZ companies have withdrawn advertising from the big social media accounts who failed us on Friday. Many Kiwi’s are closing their FB accounts disgusted with the non-appearance of Mark Zuckerberg to explain why FB failed to stop the video being shared around the world.

I have been thinking about Global Citizenry a lot this week. In the publishing blogosphere, we can become very Western focused in our publishing thinking. There is a huge market of readers out there in the rest of the world. I follow The New Publishing Standard and Mark Williams, the editor, recently got in touch to comment on my blog post of two weeks ago with some updated figures which he graciously said I could put in today’s blog post.

“In fact our StreetLib author & publisher portal roll-out is at 75 countries this week and will top 100 in April. We hope to have the entire world enfranchised with a publishing portal later this year.’
(The underline is mine.) Mark went on to add…

Globally TNPS tracked over 50 million people attending book fairs last year outside the US/UK, and came nowhere near covering all.

Mark sent me many more facts and figures and they make eye-popping reading. But to give you a hint check out one of his latest articles on what Streelib is doing in Africa.

For those people wondering about where Big Bad Wolf sources their books… they are remaindered copies onsold by the publisher. If you are a Trad published writer this will leave a bitter taste in your mouth as authors receive no money for remaindered books.

As I am a children’s book writer I’m always interested in what trends are on the watch list at Bologna Children’s Book Fair in Italy.

Jane Friedman has an interesting post on Beta Readers. They come in all shapes and sizes.

Writing the first draft- Go Into The Story

Finding the perfect title for your book- Alli Blog- Bookmark

Coming up with Scene ideas

A few things to know about blurbs- Pub Crawl

Michael Seidlinger from Melville House wrote in a blog post this week about literary citizenship and giving back to the literary community. One of our exemplary literary citizens is Joanna Penn. She has just celebrated ten years of podcasting. This is a phenomenal achievement. Her anniversary podcast is great listening and she announces that she is adding a new podcast on The Creative Penn on books and travel. Congratulations Joanna!!