Writers are great at creating books we all love. But a writer’s image involves more than just their art.

Once a writer has fans, their public image plays a large role on whether they keep them or not. What a writer posts and says has a large affect on the reactions of ones fanbase. With sensitive topics like politics, how should authors handle such topics? 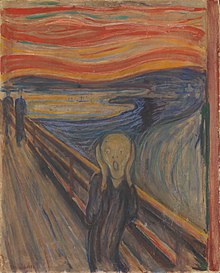 Pic: The Scream – Edvard Munch
It has been a challenge keeping calm this week with the political news dominating the media. Many writers are stuck. Do they try to steer a middle path or ignore what is happening or make a comment. I have seen writers being attacked on Social Media for daring to have a political opinion and voicing it. They are being told that their work is entertainment and to stick to that and not point out anything different, because as one fan said ‘I want a small corner of sanity where political views don’t intrude.’
So to put your mind at rest I will not be commenting… I will leave it in Chuck’s capable hands to tell you what writers should be doing
Anne R Allen has been seeing red lately over people not respecting Book Bloggers or any bloggers in the publishing blogosphere. I understand how she feels. I don’t have the readership that Anne has but I get at least two appeals a week to write guest posts or highlight someone or update a post with new information. It is annoying because it clearly shows they don’t read my blog. I ignore them including all the ‘follow up’ emails. Anne has great points to make if you are suffering the Troll Blues.
This week Geraldine McCaughrean won the Carnegie Medal for her novel Where The World Ends, a mid grade- early secondary book. She used her winner’s speech to highlight the problems of publishers dumbing down language for children. She has direct recent experience of publishers asking her not to write long words. What happens if we don’t stretch our reader’s minds? Read the Guardian article on Geraldine’s speech and find out.
With the biggest publishers of content in the world (*FAANG) taking over the interface between the creators and the consumers what is next for the poor content creator. Alli director Orna Ross published an article on the Alli blog looking at Self Publishing 3.0 -direct sales between authors and readers. We have the means. We have the technology. What is stopping us?
Last week I highlighted Kris Rusch’s blog post on author learned helplessness. The Passive Guy – contracts lawyer in real life- added some learned commentary on Kris’ article backed up with some recent discoveries of his own. (If you haven’t read Kris’ blog post, you are missing out on a valuable learning opportunity.) This leads on to an excellent article about the growth mindset of authors by Jennie Nash. Do you have a growth mindset? It may make all the difference to your career.
In industry news… a wrinkle. Audible (owned by Amazon) has started making audio first deals with writers. This has some major implications to rights sales and contracts.  Melville House Publishers saw it as a tricksy problem for publishers. Read their blog from a writer’s perspective before you make up your mind.
Should you start an author newsletter before you have a book contract? The writer chicken and egg problem. Tamela Hancock Murray suggests that you should and moreover she details just what you should put in one too.
Rebecca Monterusso has written an intensive breakdown of what a scene actually is, on Jane Friedman’s blog. “They should do the same thing your global story does: upset the life value of the character and put them on a path to try and restore it.”
This is a great article on the basic building blocks of story. A Bookmark Post.

In our house we have extroverts and introverts and people who sit squarely in the middle. This can make for challenging conversations when it comes to attending Book Launches. The introverts would rather have a quiet celebration dinner. The extroverts a full on party! So what happens when an introvert has to launch a book with a splash? L L Barkat  has the introverts guide to launching a book.

Congratulations Prime Minister on the birth of your baby girl- I’m sure children’s writers all over the country are wrapping books for you.
Maureen
@craicer
*FAANG- Facebook Amazon Apple Netflix Google (finance speak for media stocks)